Posted on September 18, 2015 by lucyaverywrites 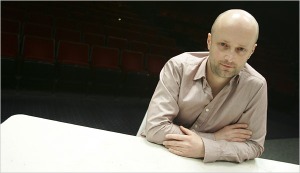 Harrower’s two hander Blackbird was an unexpected winner of an Olivier Award. It’s a concisely written piece that plays out over real time and explores what happens when a couple reunite after about 15 years. This is no ordinary couple though. She was 12, he was a neighbour and eventually did time in prison for their relationship. I enjoyed reading this piece so much I read it twice! I’ll definitely be looking at more of his work and I would encourage you to do the same as its not only an interesting piece there’s lots to learn and take from it.

So how did Harrower come to this subject? Well he was inspired by a newspaper article:
‘The story is based on a newspaper account of a man who travelled abroad to meet a 19-year-old woman he had encountered in a chat room online, only to discover that in real life she was much younger. That the couple pursued the relationship anyway intrigued Mr. Harrower, but it was a difficult play to write.’

He wrote the play for the Edinburgh International Festival, where ‘with its comparatively large budgets, [the play] had 15 characters, four locations, the ghost of Marvin Gaye (don’t ask) and a performance by a children’s choir (ditto).’ These quote are taken from an interview with the writer here.

On writing it Harrower says:

‘“You kind of have to go to these stupid places, sort of, to get back,” Mr. Harrower said ruefully. “So I went there. And then a genocide happened.” Exeunt a dozen characters.’ (Please see the link above for the full interview).

It’s made for a tense exploration of a love that is taboo and in opposition to the Duncan Macmillan I read last month, its dialogue is direct, but in a different way, it’s all about what the other character is trying to do to the other, especially when you realise towards the end that one of the characters has lied.

So what did I learn from this one?

There’s definitely something of Pinter about his dialogue which, as a Pinter fan I really enjoyed. You don’t know why the girl has come to see the man but the conversation almost instantly talks about their relationship and its impact on them. The dialogue is about what the characters are doing with the words, what the intention is behind them and their effect on the other as we join the characters in an exploration of what they want from each other now.

The text on the page looks more like poetry than script. Its full of repetitions, incomplete sentences and I’d love to see the effect of this in performance, where I imagine it would feel very real and true to the moment as the characters search for a way to discuss the relationship they never got proper closure on from each other. I’m not sure if I could write in this way myself but I may have a go.

It’s quite clear that the story of their relationship is a difficult one for the characters to tell each other and although you realise they both haven’t stopped thinking about it, maybe for different reasons, actually being face to face finally brings with it a difficulty of telling the story about a relationship that at the time felt easy to get into. This means that all our attention is on the characters in this situation and the way the story of their relationship is revealed becomes paramount with twists in the disclosure of facts. Through reading it I felt my own perceptions of the characters shift and I was left swinging between each character’s rendition of the truth, which I would think would be very gripping on stage. The moment when you start to question everything you’ve been told about the male character and what the female character wants is stunning. A very good lesson in playing with perceptions in a taboo subject, and something I’m going to try to work with more.

I could write a lot more about this play, but I wouldn’t want to spoil it for you. If it’s on in a theatre near you, go and see it. If not pick up the play and have a read yourself.

I’m seeing Pomona at the National Theatre this month so Alistair McDowall will be the next playwright I look at.